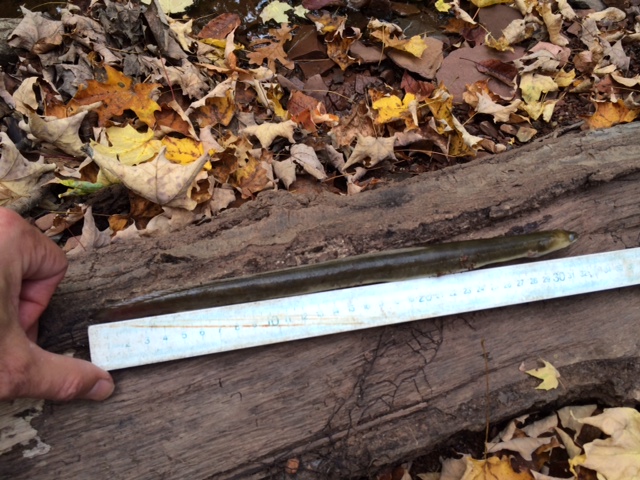 Students in the Principles of Natural Resource Management class were doing stream surveys on October 7, 2014 and found this foot long American eel (Anguilla rostrata) (dead) in a pool along Buell Brook. Eels have a fascinating life history that connect the EcoPreserve to the distant waters of the Sargasso Sea. Adult eels leave the US coast to swim out to the Sargasso Sea near Bermuda to spawn. The young hatch and move north with the help of the prevailing currents before heading into East Coast estuaries. The males generally stay along the coast while the females head upriver. The young eels (called elvers) live in headwater streams and other freshwaters, like Buell Brook. Spending the day buried in the sediments and debris at the bottom, they come out at night to feed. The eels take up to 20 years to mature before returning to the ocean to spawn.

While we knew that eels lived in Buell Brook, this is by far the largest we have found.